League Two Rankings: The strength of each team’s defence after 17 games

We’re onto our second run through our League Two Rankings. Throughout this season we’ll be analysing all teams in League Two and attempting to put some reason behind League form and position.

These rankings look behind just the usual goals for and against, games won and lost, to understand how each team compares in League Two. Five separate measures are used within each defensive and attacking area to rank the efficiency of all League Two teams both home and away. This gives an indication of the strengths and weaknesses of each team on the basis of the statistics available to us. First up are the defensive rankings…

Total Number of Shots Against Per Game

Of the top ten teams with the fewest total goals conceded, only Burton, Macclesfield and Morecambe allow their opponents a higher than average number of shots against them per game. The remainder can attribute restricting opposition chances as a critical factor behind protecting their goal.

Swindon have the most effective defensive unit, allowing a low 7 shots against per game, playing a key role in protecting Wes Foderingham in his 5 successive clean sheets in League Two.

There are two teams with a significant disparity between their record home and away.

Aldershot have the lowest of any team with 5.5 shots against at The Recreation Ground, however it all falls away on their travels with their opponents allowed to create nearly double the chances at their goal.

Torquay United are the division’s leaky defence in terms of failing to restrict opposition chances. While their 25 goals conceded is the 11th best in League Two, their combined average of 14 shots per game against will certainly make watching them entertaining, yet nerve-racking stuff for the Gulls’ supporters. Their failings come away from Plainmoor, with an average of 16.5 shots by their opponents is by far the worst in League Two.

Percentage of Opponent Shots on Target

You might have an effective defence through restricting total chances however if the majority of the opposition shots are on target its going to be difficult to keep shots out of your goal.

Despite having the 3rd worst tally in the goals against column, AFC Wimbledon have faced the fewest shots on target (43%), suggesting their problems may lie elsewhere.

Having noted Torquay for their lax defence, fortunately for them, only 43.1% of those 14 shots against test the keeper, perhaps pointing to the inefficiency of their opponent’s accuracy when given so many chances on a plate.

In the bottom section of this table we find league leaders and joint fewest goals conceded Southend United, having faced the second highest shots on target (56.5%), including a massive 69.9% at Roots Hall. Suggesting their goalkeeper should take significant credit for their league position.

Back when we looked at these rankings after 9 games Morecambe ‘keeper Barry Roche had an impressive save rate of 90.9%. Now the Shrimpers ‘keeper is equal with Macclesfield at the top with 83.3% following only 1 clean sheet in 8 games.

Southend sit 3rd with 81.7% of shots on target saved, confirming the above assumption that their ‘keepers have come good when needed to deal with the very high total shots on target.

The impact of Wes Foderingham and 5 successive clean sheets for Swindon has seen our save rate rise from 22nd and 61.5% to a more respectable 72.2%. Needless to say Wes’ own Save Rate in League Two since joining Town has been 100%!

After Crawley had one of the strongest defences to restrict overall shots against, however their lowly 22nd ranked overall save rate of 63.5% and woeful 44.4% result from their away matches shows how vulnerable the Red Devils are on their travels.

Restricting your opponent’s chances around the box, in particular from corner set pieces, is crucial to preventing pressure around the box.

Both Crawley and Swindon prevent corners to less than 4 won by their opponents per game. If only could replicate their home performance of 2.6 per game against away from the County Ground….

Like their previous lowly position in the rankings, Torquay United give away the second highest number of corners per game with 6.9 at home and 6.6 away.

Swindon have controlled games to restrict their opponents to the lowest amount of possession in their combined home and away performances with an average of 53.7% in our favour.

The teams which give away the most possession relate to those at the bottom of the league table, with the exception of Burton Albion, who have been effective despite giving away 52.6% of the ball.

Adendum: There is a strong correlation between giving way less possession and a lower number of shots and corners against per game, indicating that possession is key to restricting your opponent’s chances in front of goal. 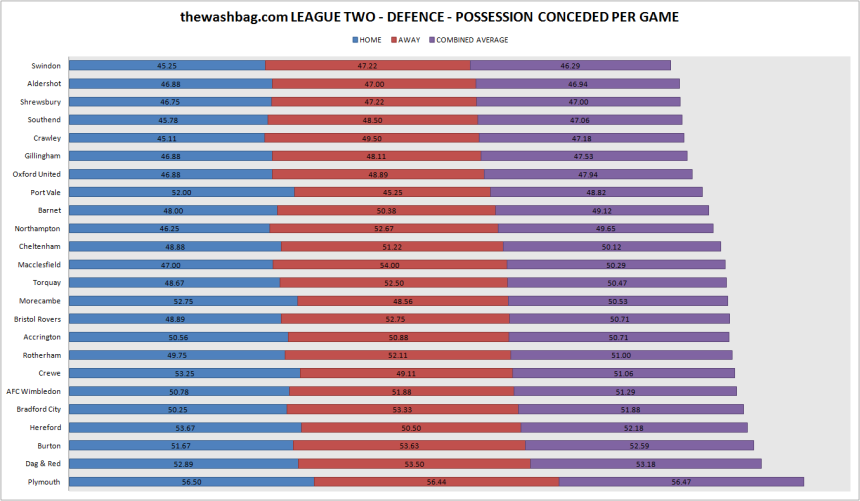 With a very strong and effective defence both home and away, Swindon lead the way with a score of 60 points, 12 points better off than nearest challengers Shrewsbury Town. After recent years of sustained ineffective defences, it’s a complete welcome surprise to see Swindon top of both the home (27) and away (33) rankings, providing another indicator – other than goals against – that we are now tough to beat.

The top six defensively ranked sides; Swindon (60), Shrewsbury (72), Crawley (79), Oxford (85), Cheltenham (86) and Southend (89) are all within the promotion places in League Two. Only 5th placed Morecambe find themselves down at 11th in these rankings with a score of 128.

Of the best placed sides in the League Two table, Burton Albion are ranked 21st defensively with a score of 162. The Brewers are just short of worst ranked Plymouth and Hereford who tie with a score of 174. Are Burton punching above their weight in League Two and will their defensive frailties be exposed as the season progresses…? 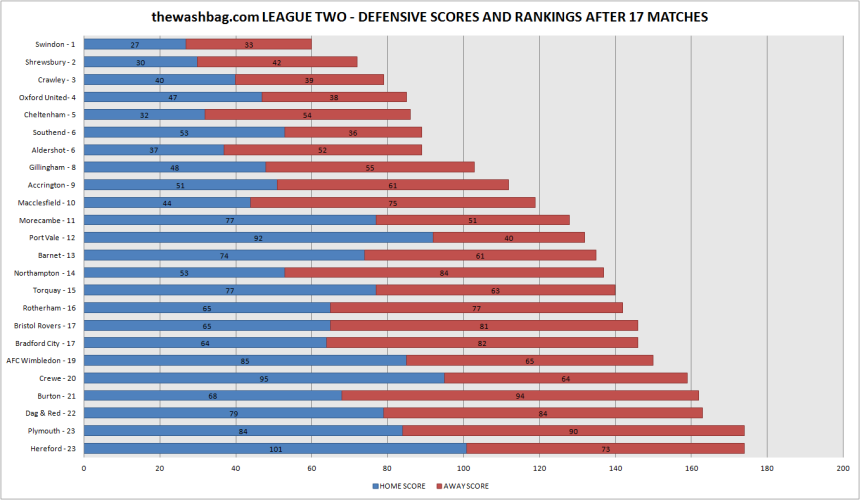 To enable some judgement over the above rankings the results need to be put into some context. What the next graph shows is the quality of the opposing strike force that each team has faced.

Macclesfield have faced the weakest strikers so far with their opponents scoring 7.9% of their total shots, compared to Rotherham’s opponents notching up an impressive 19.5% strike rate against the Millers which may explain their 16th placed defensive ranking and recent plunge down the League Two table.

With Swindon having seen their opponents score 12.6% of their chances, the 12th strongest in the division, does the ‘average’ attack we’ve faced explain our no.1 defensive ranking, or can our defence take the credit?

Taking into account opposition strength, the best performers overall are Crawley Town, who sit 3rd in the defensive rankings despite facing the 2nd most effective strikers scoring 17.8% of their total shots. 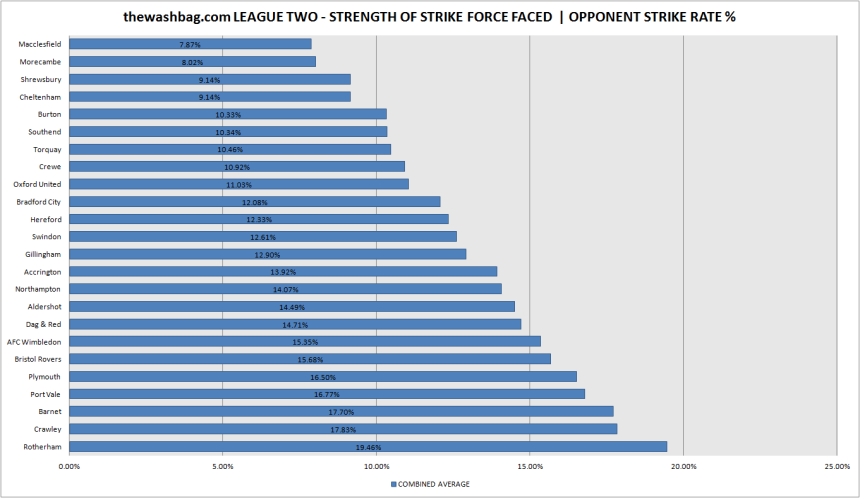 Check back tomorrow for our Attacking Rankings.

How are these rankings worked out?

Each of the 5 defensive measures are ranked 1 to 24. Three assessments are made for each measure; home, away and a combined overall rank.

Each of the 5 measures are sorted (above) by the combined overall rank.

The overall defensive ranking is created by the sum of the 5 home rankings and the 5 away rankings for each defensive measure.

Where is base the data from?

Data is collated from the Press Association statistics published by the Football League.