Posted on September 8, 2011 by stfconly 8 comments 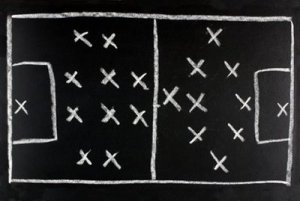 Is Swindon’s 442 too open? Alex Cooke looks at the blueprints for Paolo’s master plan.

No one could doubt that Paolo Di Canio is demanding: his pre-season training, half-time tantrums and full-time ABH prove at that. But tactically Paolo also asks a lot of his players because he has created a system that demands discipline and athleticism, and can yield great results, but also leaves little margin for error.

At first it looks like a traditional 442 – but it demands more than some defensive iterations of the system. Instead his 442 is built on attack and not possession. It is built on each player winning their individual battles, and built on wingers. And more importantly, it has only earned us three wins.

The key to Paolo’s 442 are the wide players. For him they are everything: creators, goalscorers and the cover for the central midfield pair. It gets the best out of Matt Ritchie, but it also puts a huge amount of pressure on him and whoever is on the other flank.

During the attack their job is obvious: start wide, take on their men and to put balls into the box. However, what is noticeable is that their crosses are deliberately played very deep, seemingly aimed not for the striker, but for the winger on the far side to head in at the back post. It’s something that Ritchie has already managed to do twice, but that didn’t work so well when Nathan Thompson was tried there against Cheltenham.

Interestingly Di Canio also favours the fashionable inside-out winger, often with the right footed Lander Gabilondo on the left and the southpaw Ritchie on the right. It is a trend that has flourished across the world with the liberalisation of the offside law meaning that the winger doesn’t have to beat his man every single time, instead the ball can easily be swung in towards the back post. It also allows for an overlapping full-back, such as Caddis, to go outside this tucked in winger. This then frees the winger to come inside, forcing the opposition fullback onto what is usually their own weaker foot and allowing him to shoot.

The role of the forwards in this set up should also suits mobile and intelligent strikers as they have to do a lot of work outside the box, linking play and pulling the central defender into the fullback positions, making space for the on-rushing winger to come inside.

It is also worth noting at this point how the left winger gets less support from his fullback than the right. Part of this is due to the difference in Callum Kennedy and Caddis as players but it is also due to the practice in 442 of one of the fullbacks staying close to the central defenders as cover.

This works the other way too, as so far Gabilondo and Raffa De Vita offer less protection to Kennedy than Caddis gets from his winger. Which goes some way to explain why so often opposition chances, and goals (both at Shrewsbury), come from our left side, particularly when such inexperienced defender is left to cope unshielded by his winger.

However, once the attack breaks down, you can see how much ground the  wingers have to cover. For not only must the they retreat from their wide and advanced starting position, they must also tuck in tight to protect the central midfielders and compress the space.

Because Paolo’s 442, built as it is on shape not possession, they need to win the ball back by pressuring the opposition. However, The forwards don’t pursue the rival defence deep in the opposition half, that would force the midfield to come up. Instead they pressure in the deep midfield – around the regista position.
This allows the central pairing in the midfield can hassle and harass, while also retaining their positional discipline to ensure that they always block any balls through to the opposition strikers.

This task which can be made more difficult when the pair are outnumbered in the middle, as Oxford’s and Crewe’s 433 and 451 did. For not only does the mean an extra body in their area it allows the opposition to create simple triangles and pass around them.

It is also a system that also doesn’t seem to suit all of its members, such as the youthful Jon Smith, whose positional indiscipline and tendency to dive into tackles, exacerbates the midfield gaps allowing the opposition straight onto the back four.

Arrigo Saachi found a solution to these problem by compressing the play into a much smaller area. In his 442, the team stretched just 25 metres from centre forward to centre back, but with Di Canio’s system there is less of this compression, and anyway the revised offside rules would make it far trickier to play. However, Town’s defence are cautious, tend to sit deeper and cover. They also don’t have a lot of pace at the back to cope with any runners. Also, if the forwards are drawn into pressing the rival defence, they pull the midfield pair up with them further increasing these gaps.

The remedy to this problem is of course familiarity: if the players knew each other’s game better, they would know when to cover and when to support. And that will come with time and games.

The other problem does seem to be being gradually solved. Against Southampton Di Canio played Medhi Kerrouche deeper behind Leon Clarke and used him to work with the midfield pairing to stop Saints attacks at origin in the second half. Against Rotherham De Vita played a more restrained left wing role than Gabilondo where his uncertainty made him more tentative and so strangely more disciplined. In the middle the return of the disciplined Alan McCormack offered the certainty to allow Simon Ferry to support the forwards.

The next stage in this evolution would surely to take a leaf from Dennis Wise’s playbook for away games, after all Paolo’s men have only won once on the road. For under Wise the 442 permanently brought the widemen in closer to the centre and let the forward line drop back from their harrying. This made his team harder to play though, stopping the kind of expansive football seen in the comeback seen at Shrewsbury. It also relied on a central defence strong in the air as yielding the flanks invites crossing. The team would then need to pick their moments to attack, but as Saturday showed there is enough talent in this Swindon side to flourish with only a little tinkering to be made.