It’s only taken 18 months! Yes, finally I can welcome ‘The Overseer’ to The Washbag. Perched in the Arkells Stand with his flat cap and pipe, Neilsen ‘The Overseer’ gives his expert and often irreverent view on Swindon Town.

From ‘Bell-ends’ to ‘Bellissimo’ – what a contrast from the morale-sapping dross we were subjected to last season! The Paolo Di Canio [hopefully fascism free!] Revolution got off to the suitably sizzling start we’d all hoped for by derailing Crewe Alex three to zero in the battle of football’s foremost train-spotters.

With PDC’s appointment having provided a much needed shot in the arm for all of the Red Army in the wake of 2010 – 11’s morphine-laced lethargy, in contrast the second half of the Crewe game felt like a heady cocktail of valium and Viagra. This served both to revive the feel-wood factor plus to well and truly blow away the cobwebs, like converting a derelict house into an Indian restaurant. On reflection, surely that should be an Italian restaurant.

Whilst ‘Premature’ is unofficially my middle name, I’d promised myself I wouldn’t read too much into whatever happened come Chapter One of Forty Six in Town’s 2011 – 12 League Pooh chronicle. It would be remiss not to recount how at times in the first half we were all over the paddock with seemingly only Aden Flint’s ubiquity and Crewe’s blues in terms of finishing sparing the Fockin’ Robins from facing the usual angry backlash from the [un]faithful in the stands. Plus presumably a Paolo Wallop-Chops verbal grenade! If Town are that disorganised in many more games this season, then they’ll stand to take a few tonkings.

Indeed, in a veritable ‘welcome to management’ moment and a staggeringly rare outburst of emotion emanating from the library that usually is the Arkell’s Stand, it took only 25 minutes for one pisshead to throw his Tennent’s Extra scented rattle out of the pram with a vexed cry of “Paolo! Shit! Sort it out!” as if this was some sort of mass nappy changing exercise we were beholding. One assumes that Motormouth, tiddled and disoriented, meant to take up residence in the Clown End but instead fell into this alternative neck of the woods, either attracted by the name of our stand or simply because his internal Shat-Nav failed.

Town rode their luck somewhat in the first half with just the odd, little glimpse of nifty passing to hint at what was hopefully to come. Suddenly from nowhere, Rainbow Junior’s [Willy Bodin’s] up-ending just before half-time allowed Carl Kennedy the opportunity to slot home from 12 yards in a fashion that would’ve had even Ron Jeremy looking on enviously. That brought with it a somewhat fortuitous lead that gave the game a very different complexion and probably spared the lads the habitual H/T chorus of dissatisfied boos-before-the-booze, instead providing a platform to build on.

It didn’t seem as though that late strike necessarily changed Di Canio’s team-talk as much as you imagine it might have done. Whatever the Italian for ‘hairdryer’ is, Town certainly went up through the gears after a 15-minute pit-stop – maybe the secret was some kind of Ferrari-themed energy drink with extra Mafia muscle (well, we certainly couldn’t entertain the consumption of Red Bull in these parts; that sounds like some hideous concoction that Robert Maxwell would’ve endorsed). 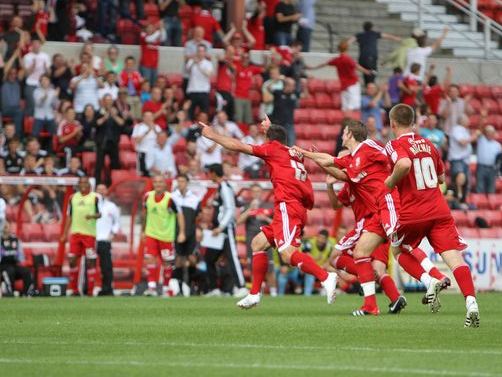 A couple of early second-half crosses signalled some increase of intent as we knocked with ever bigger bangs on Alex’s door. Whilst The Italian Job famously harked that one is only supposed to blow the bloody doors off, our Italian’s job witnessed us as good as blow the bloody roof off as we went 2-0 up thanks to Captain Namibia unleashing an absolute Frankie Fredericks of a thunderbolt that was by far the highlight of the afternoon, wallop! That said, I dare wager that it was pushed close by PDC’s celebration of this Out Of Africa piledriver, demonstrating that the Latin fire still burns. Our manager must surely have come perilously close to tearing an Oliver Ripper of a hole in his designer trousers with a celebratory slide down the touchline that left him on his knees as gloriously as Divine Brown.

Indeed, yer man Pablo Di Casso was expectedly animated and restless throughout, even walking at one point 3 or 4 yards onto the pitch to give instructions. The fourth official must’ve spent a fair portion of the game impersonating Harry Enfield’s Waynetta Slob hollering at the dog, “Pauly, get back in yer box!”. Of course you wouldn’t have blamed the bloke for thinking twice about getting on PDC’s case, for fear of giving our new gaffer half a chance to recreate that notorious and reprehensible (albeit mirth-mongous) Dick-Canio moment of 11 or 12 years ago. I am of course referring to that time when scowling Owl Paolo feistily opened a can of whoops-on-the-ass all over referee Paul Smallcock following a controversial Hillsborough red card against The Arse’. Even David Blunkett saw the funny side of that by all accounts.

The third goal was arguably more than we deserved, but no more than In Like Flint merited on an individual level – he delivered an immense performance head and shoulders [shampoo that mullet, lad!] above anybody else. For a guy who seemed destined to be third choice centre-half, it was an inspiring and imposing statement of “Drop me if you dare” by the former Alf Roberts Town man mountain. Let’s hope he kicks on to fulfill his potential and if need be in the process leave Comazzi or Devera picking splinters out of their arse-cheeks due to bench warming. Flint provides the sort of much needed height we’ll require at the back for the physical rigours of League Two (or Division Four in old money / as this nostalgia man still likes to call it), an aspect that even Crewe gave a nod to fielding some big, old boys in defence.

And therein ultimately lies perhaps the primary reason for keeping our feet firmly grounded after a solitary game, no matter how uplifting a result it may have been. With their dyed-in-the-wool adherence to the principles of the beautiful game as espoused by the institution that is Dario Gradi, Crewe’s attractive passing game surely isn’t typically representative of the general, up-and-under bombardment we stand to face this season. Crewe’s style of play likely lent itself to us being able to thrive in endeavouring to do likewise, much as we apparently did in besting Championship Reading in certain parts of last week’s friendly. Nevertheless, this can’t really give us any accurate insight into how we may fare in the face of the rudimentary physicality the majority of bruisers will bring to the table this season.

Again, Flint stole the bulk of the headlines, meanwhile our youngsters Kennedy and Bodin were also a refreshing breath of juvenile air, looking far from out of their depth. Whilst Phil Smith and Timlin will likely always have their defiant detractors, they too applied themselves more than ably (lest we forget they contributed decently during our last campaign in this division 5 years ago). I can grasp why PDC still talks about playing with a big chap upfront and that being the most glaringly absent piece of the jigsaw, but there already appears to be healthy competition for striking berths amongst several contenders who given sufficient game time might all be capable of bagging 10 – 15 goals a piece. Maintaining Matt Rich-Tea as a League Two player could prove increasingly futile as you sense he ought to be capable of putting in a few stellar shifts that will encourage others from loftier perches to take a dunk on him. Mind you, at various junctures of the Crewe game he looked susceptible to picking up a red card due to petulant tantrums aimed at officials, almost as pissed off as Mike Tyson with a parking-ticket. The central midfield conundrum will be a tough one to juggle, with Jon ’No Nonsense’ Smith happily not sailing too close to the disciplinary wind folk had whispered about; Risser steady if unspectacular [seems ironic to use that word when you consider his goal]; McCormack looked miles better than just back-up; plus even Wee Ferry, so often surly last season, looking in good spirits during his brief cameo.

The undoubted star of the show though was the man the media circus had flocked and assembled to gawp at, perhaps the figurehead who can help deflect large swathes of attention away from his troops so that they can simply focus on playing. Suited, booted, downright imperious and for the most part refreshingly calm, Di Canio came through his first significant examination with flying colours red. Here’s hoping it proves to be more than just a false dawn and that his obvious star pedigree allows him to flourish as Macari, Ardiles and Hoddle did. Whether PDC can keep his passion and emotions in check when our dear friends Whoreley Town roll up with Steve Evans Above chucking a Benny and several Mars bars around remains to be seen!