Three of the best Swindon managers according to Johno

Seeing that I’m currently asking you to vote for your greatest Swindon Town manager, Adam Johnson provides an insight into his top three Swindon managers of recent years.

Even though Swindon Town have been one of the more inconsistent football league teams, we have been consistent in having big name managers.

It was the Division Two title winning season of 1995/1996 that first hooked me in and this has to be taken into account. I’ve not only enjoyed managerial tenures such as McMahon’s but also the likes of Jimmy Quinn, Iffy Onuora, Andy King (who I actually enjoyed having as manager…) and Maurice Malpas. For those of you who were around for the Macari, Ardilles and Hoddle era, have sympathy for me.

So I have picked out three managers who, in my opinion and with the knowledge I have whilst being a fan, have brought about memorable times at Swindon Town. 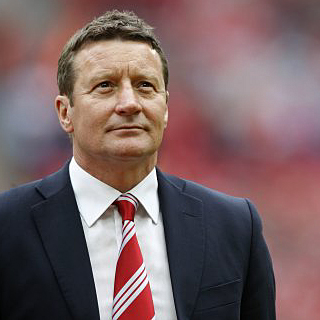 He may have been the cause to our relegation last season but to me Danny Wilson brought about the best season I’ve had of following Swindon. He took us back to Wembley which after years of near misses and pure disappointment at least gave us some pride.

That one night at Charlton is the best feeling I’ve had at a football match and one that won’t be forgotten.

Wilson transformed a near relegated side after the mess left by Malpas to one that was so close to being in the Championship.

It still hurts that he couldn’t build on the season of success and the debate over where the faults lie will never end. However he  still created a good side that made a positive atmosphere around the club for the first time in a while.

I was at least born by the time Hoddle took over and, seeing how the Premier League has revolutionised football, to say we have been there is a huge accomplishment.

He may have left us when we actually got to the Premiership but his charisma and ability from midfield is something I’ve enjoyed on various videos and DVDs. Who knows what could have happened if he’d stayed but he brought about a moment of history at Wembley and that famous 4-3 win over Leicester to reality.

In my eyes his achievements may seem greater as I didn’t get to be a part of it but I look back with huge jealously on anyone who was at Wembley that day and around for the Premiership season.

I don’t think I’ll get to see such a season but Hoddle at least gave others the opportunity.

I wasn’t around for the Macari years but it comes across as quite the football fairytale. The ex Manchester United player came in with an ambitious board and brought success in between being sacked and re hired. He then took us through the football league pyramid as so many of us try to do on Football Manager.

Anything can happen in football and Macari proved that.

Taking a club who were struggling in Division Four and bringing in nowadays legends such as Duncan Shearer and Jimmy Quinn, Macari built a strong team. His side made it through the football league and ultimately fell short, which is the only flaw in this fairytale.

He may not have been able to achieve the end goal of getting Town into Division One but his lasting impression moved onto Ossie Ardilles and eventually Glenn Hoddle who got us promoted to the Premiership.

Ardilles should have been granted the accolade of getting us into the top division but sadly he didn’t and so with Macari doing so much work over a long period of time, I’d say he is Swindon Town’s most influential manager.