League One Predictions: Massive task for Swindon to avoid drop

Following the six Npower League One matches this evening, nearly all results in our favour, he’s an updated League One predictions table showing how it all effects Swindon Town.

As usual this is based on projecting home and away form so far this season to the games remaining. 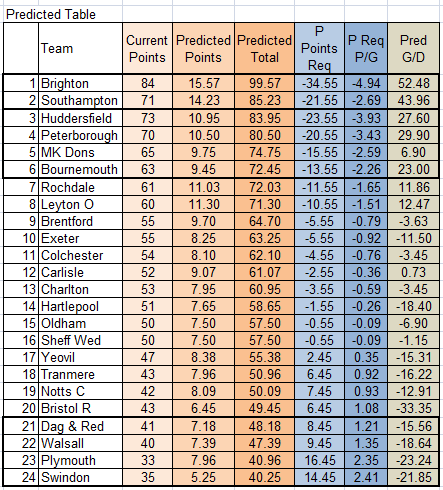 Brighton still shown promoted with 84 points as Huddersfield will finish just shy and have an inferior goal difference.

Southampton and Huddersfield have now secured a play-off finish. Peterborough are favourites to join them.

Bournemouth’s recent drop in form sees them now really in a 4 way fight with MK Dons, Rochdale and Leyton Orient for the last two play-off spots.

At the other end, back to back wins for Sheffield Wednesday sees them odds on to avoid the drop.

50 points is now again the target to avoid relegation, having been as high as 53 and then 51 points in the two previous predicted tables.

Bristol Rovers are now the big movers having gained 5 points in their predicted total which now stands at 49 meaning they may end up in League One next season.

Both Swindon and Plymouth appear set to be left behind trailing at the bottom. Town need around 14.5 points to have a chance of avoiding the drop, an improvement of half a point without even playing this evening…

Rovers have shown successive wins makes a heck of a difference, however can Swindon really secure 14 or 15 points from 18 remaining? Probably not…