As Swindon Town were denied a blatant penalty in the dying moments of Saturday’s game, it ended a perfect opportunity to gain an advantage on our relegation rivals as results elsewhere all went in our favour.

Paul Caddis was clearly fouled by two Dagenham & Redbridge defenders, yet bizarely referee Sutton or even his well-sighted assistant didn’t see fit to award the penalty. A poor decision, bemusing the fans and players as a key decision went against us, when we needed it the most.

We can all blame the officials, rightly so in this case, however this came in injury time after a second half during which Town failed to build on their single goal advantage.

We can’t rely on the referee to make the right or wrong decision and instead we’ve got to go out there an actually win a win ourselves.

Yet that’s been the problem this season, our inability to break down stubborn defences as a result of a lack of creativity or fire power up top.

Fortunately with the arrival of Calvin Andrew from Crystal Palace we’ve secured the services of an excellent strong, technical and mobile forward with a work ethic that makes Dossevi, Obika and Pericard look pedestrian. The only problem is he’s only here for 1 month and I’m not sure if this can be extended?

The Mike Grella goal came at the end of a dire first half, after a route one long ball launched by Smith, two Dagenham defenders couldn’t deal with the ball and an alert Grella capitalised on the mistakes to pounce and lob Roberts.

An impotent Town were dominated straight after the break.

Dagenham considered themselves equally hard done by after Bas Savage was sent tumbling in the second half. 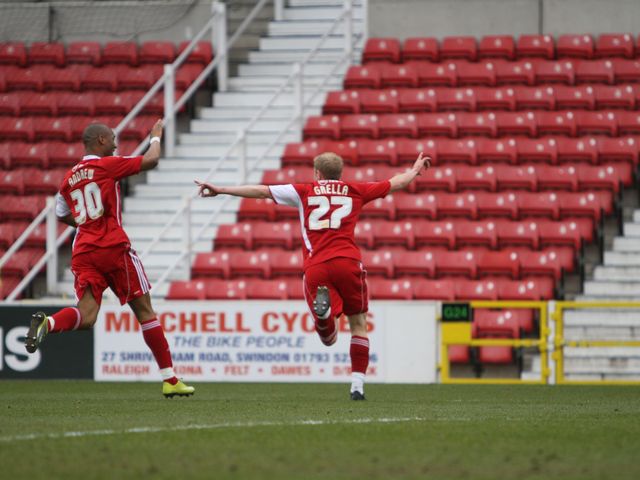 It wasn’t until the 60 minute mark that Douglas, rather than Sheehan, struck an excellent long range free kick that tested Roberts.

Matt Ritchie then created space on the right to turn inside and whip in a fantastic curling shot from 25 yards out, however Roberts was again equal to tip the ball wide of the posts. It’s always great to see a long range shot struck right in my eye of sight, I couldn’t believe Roberts saved it…

Then, Scott Cuthbert’s header was cleared off the line from the resultant corner. We just couldn’t score a second.

As the minutes passed it was inevitable our failure to get enough efforts on goal would come back to haunt us.

If our goal came from a series of defensive mistakes, Dagenham’s came from our inability to deal with a long throw and clear the ball. No, you can’t account for a cruel deflection, but the space allowed for Nurse’s shot to be fired in was only created because of Prutton’s wandering position.

Late attempts to press for the winner didn’t yield any clear cut chances. I say again and again…there is just not enough movement and not enough close range shots on target to continually test the opposition keeper.

The only real chance in the dying moments was Elliot Benyon scrambling to get onto the end of a Michael Rose cross from the left. A good chance, it would’ve been fantastic if Benyon had connected and scored, but it just wasn’t to be.

The Dagenham game was the final of the three matches against fellow teams trying to avoid relegation. These were meant to yield at least 7 points, possibly 9, however just 2 have been added to our paltry tally.

After 14 games without a win and Town looking doomed to join the Football League basement division, I wouldn’t put it past this team to get the long awaited win at Huddersfield and follow that up with a first home defeat of Brighton. You never know stranger things have happened…