Colchester United lost 2-1 at The County Ground in a match marred by refereeing errors and serious oversights, however the quality of the football fortunately didn’t suffer as Town finally found the gear we’ve been lacking over recent weeks.

After Wilson went ‘back to basics’ at Plymouth, a decision he really should have  made weeks earlier, the line-up was certainly better balanced in midfield. Ritchie took the place of the out of form McGovern on the right, an excellent Prutton and the returning Douglas bossed the central midfield and Timlin provided natural width on the left flank. The 59/41% possession in favour of Town best demonstrates our dominance, our best overall possession percentage in the league so far this season.

Fortunately Pericard was injured, so for the first time in a while Togo international Thomas Dossevi was allowed to start. I’ve often wondered why Dossevi hasn’t been properly utilised by Wilson so far. Whilst I understand he is acclimatising to the strength and pace of the English game, he could have been used more, particularly at home on the excellent County Ground pitch that suits his highly technical style. Dossevi certainly showed he’s more adept at holding up and distributing the ball than Pericard, stronger than Pericard and obviously he’s got a better long range shot, whereas Pericard is praised for the tap-in goal against Plymouth and other balls deflected in off his arse.

Despite the first half advantage Town succumb to a dismal error by the Assistant Referee along the Arkells Stand touchline. David Mooney received the ball offside, however this wasn’t spotted by the Assistant even though Mooney was standing right in-front of him. From the resulting cross Ashley Vincent rose unchallenged to head Colchester level. Rightfully the Assistant was berated by the Town faithful and players, however I’d be more concerned with the Town defending as Lescinel made a lacklustre attempt to tackle Mooney on the wing, then Sean Morrison completely misjudged the flight of the ball, leaving Scott Cuthbert helpless on the wrong side of Vincent who couldn’t have missed.

In addition to this refereeing blunder there were several other highly dubious phantom offsides, missed fouls (for both teams) as well as play being brought back in favour of Colchester well after the incident and advantage having originally being given.

When Town took the lead in the second half this was the culmination of the best move I’ve seen Town execute this season. Ritchie passed infield to Timlin who backheeled the ball to the forward running Douglas who took a single touch to play in Austin with a perfectly weighted pass, with a confident first time low placed shot Austin finished past Williams. The fluidity of the team move was a sight to behold and justifiably Town were back in front. 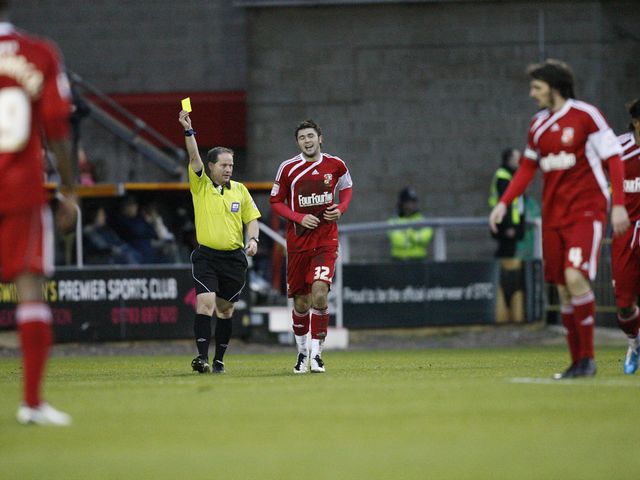 After the goal the Austin booking showed how pathetic the Referees and the Laws they implement are. After sliding along the grass, Austin rightfully ran to the Town End to celebrate with the fans, only to be cautioned when returning back to the the centre circle. The caution was made as the Referee decided there was a contravention of Law 12, however was there any contravention? Were his gestures provocative, derisory or inflammatory? He didn’t climb on a perimeter fence. He didn’t remove his shirt or cover his face with a mask. Nor did Austin delibraelty hold up play. If it was as I suspect because he ran to the fans, firstly this isn’t an explicit infringement in Law 12 and secondly so did several of his team mates, so why didn’t Timlin, Ritchie, Prutton, Rose, Ball, Douglas et al get booked? This just emphasises what a shit game the officials had.

In the final moments of the game I almost expected the officials would impose their errors on us again and cost us the vital 3 points. Thankfully the final whistle passed without any further blunders so we secured an excellent home win moving us in the right direction in the League One table. The officials received a clear an indication of their awful performance from the fans as they walked off, hopefully this will send them the message that what they do has a direct bearing on the game and to continually make obvious mistakes isn’t what we expect in the Football League.

Finally…it was great to see young goalkeeper Mark Scott making the first team squad and sitting on the bench in place of David Lucas. Just rewards for an excellent 3 month loan spell at Swindon Supermarine and appearance for Marine in the FA Cup 1st Round.