The Value of Charlie Austin

Posted on September 3, 2010 by TheWashbag 3 comments 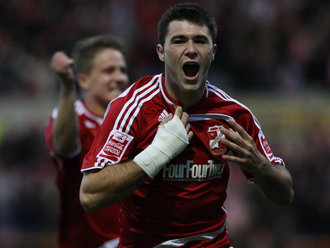 Now the transfer window has closed we are assured of seeing Charlie Austin in a Town no.32 until at least January.

After other clubs had previously made their interest known, Championship side Millwall tried and failed with a £600,000 deadline day bid for Austin. This figure certainly represents a significant increase above the (up to) £50,000 that Town paid for Austin less than twelve months ago from Poole Town.

With the bid rejected as it failed to meet Fitton’s valuation, how much is Austin worth to Town and is this more than just financial?

Understandably there has been considerable hype about Austin since late December 2009. This was when the national media started to take notice of the brickie turned pro footballer scoring aplenty with seven in seven games. His transfer market value is not only a reflection of the 20 League One goals last term but of his situation, his meteoric rise and logical comparisons with Ian Wright, Geoff Horsfield and Kevin Phillips who all made spectacular rises from lower down the pyramid in their early 20s.

In that way, Austin is highly prized and valuable asset. Of course this all depends on his continued goalscoring form. Can he sustain or improve on his 52.3% goal per game ratio in all competitions?

If he can, then my estimate of the likely £1.6m to £2m valuation that Fitton would have placed on Austin would certainly look justified. With some fans calling for a £2-5m price on his head, I’m not convinced that, even in these times of overinflated fees, this could be achieved for a player with less than a year in the Football League and only proven in the English third tier.

Other than purely monetary, Austin’s value as a presence, personality and figurehead to the club and fans can only be described as irreplaceable.

Ever since he started in the first team and immediately started to poach a few goals, then not long after he started to create some great chances and goals for himself through his improved movement and vision, Austin seemed to conjur a delight and jubilation that could not be attributed to another scorer for me, perhaps since Fjortfoft. This is most likely because of the manner of his progress and swift rise through the ranks.

I’ve never known a Town player to inspire the kids at the games like Austin. Many are more than excited to see him in action. They want to be him, play like him and importantly want to see him score. He is becoming a hero to them. I can’t help overhearing the conversation of a kid to his dad who’ve been sat behind me on a few occasions last and this season – “Dad, when’s Charlie going to score?” – then he inevitably delivers. There aren’t many ‘inspirational’ players of this type outside of the over hyped Premier League.

In these times of player loyalty diminishing at an ever rapid rate, I’d like to have faith in Charlie to buck the trend and progress his career at Town for a good time yet. By confirming he’s happy to stay at Town for now gives some comfort, at least until at all starts again in January.

So as far as I’m concerned, Charlie is worth more than cold hard cash to the Town faithful.