No time to LINGer

Posted on November 3, 2015 by TheWashbag 3 comments

Lee Power today confirmed former Town midfielder Martin Ling as the club’s new dugout arm-waver on a two and a half year deal. Of his new man Power said “he ticked all the boxes”. Ling himself said all the right things to offer optimism such as, “Swindon are in a false position” and described his time playing for the club as “the best of his career”.

To the fans his message was clear saying “we must all pull as one” and quickly set his stall out by making his first target “getting a winning culture back at Swindon”.

But who exactly have Swindon hired..?

For those who can remember his County Ground playing days, Ling was an attacking midfielder who had two spells with Town. He made his real impact under Glenn Hoddle and became an integral member of the side that gained promotion by beating Leicester in the play-off final of 1992/93. After that his formed dipped and he left the club in 1996; making 190 appearances, scoring 13 goals.

As a manager Martin Ling has had spells at Leyton Orient, Cambridge and Torquay, so there’s no better place than to seek the views of supporters from those teams and what Town can expect… 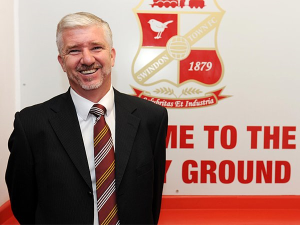 Appointed in 2003 after a caretaker spell, Ling got The O’s promoted in 2006 from League Two and successfully kept them up the following season. Oreint topped the table for a period the following season before finishing mid table. In January 2009 Ling left Orient in 21st position.

Leyton Orient fan Christopher Lomax said “Got us promoted with a team full of spirit and character. Slight inconsistency with results.”

A turbulent start at the then Conference side, Ling resigned just eight days after his appointment citing differences with the chairman. Sixteen days later he was reinstated as the then chairman had left the club. The Cambridge board praised Ling for his honesty, integrity and strength of character. Mixed results saw Cambridge manage to avoid relegation in the end and Ling rebuilt the squad completely. Another poor start though saw the fans turn though. Ling always claimed he would not quit but was eventually sacked.

Cambridge fan Jamie Simper said “He was a disaster for us. Worst football I have ever witnessed and we went backwards so far under him.” Hardly encouraging reading…

Ling signed in 2011 after Paul Buckle left to join Bristol Rovers. He endeared himself to the Torquay fans claiming double victories over arch rivals Plymouth for the first time in 40 years. Ling guided Torquay to the League Two play-offs where they lost to Cheltenham.

Ling again would make many changes to the squad including signing Swindon winger/forward Billy Bodin for a fee not short off their record. In January 2013 Ling had to take some time out for health reasons before his contract was finally terminated in April of that year.

If you look at what Dean Cox said and compare it too what is needed currently it is virtually identical. In Williams (and soon to be Embledon) we have coaches to build the Town “Philosophy” what Power continues to need is someone to manage the players.

Equally looking at what Christopher said, it is clear there is quality in this squad, it is just unlocking the character within it.

If all that does not get the fans on side, the fact he was manager of the Orient side that relegated Oxford from the football league should be quite enough to demonstrate his Town credentials.