Press Watch – Beatings, Fitness DVDs and Farewell to the Quiff

Posted on January 9, 2013 by TheWashbag 2 comments

Welcome to Press Watch by Brendan Hobbs, TheWashbag’s sideways glance at all things Town related in the media. If you see anything remotely concerning Swindon Town in the worlds media get in contact with me via Twitter @mrbraindown

And after witnessing two disgustingly arousing performances at the County Ground over the Yuletide period I’m beginning to agree with her point of view.

Saying that, she also once said that there was nothing better than inserting a smidge of Billy Whizz into your chaps Japs Eye. I’ll have to take her word for it as I have absolutely no idea what any of those words actually mean, and neither did my vicar or the secretary of the local Women’s Institute when I asked them, strange.

The ‘dejected’ face of the fantastically named Tranmere midfielder Max Power sums it all up in a nice photo reel courtesy of the Liverpool Echo. Let’s hope the photographer Kieran McManus got a new Thesaurus for Christmas though, as the word ‘dejected’ (and variants of) are used five times within the slideshow.

According to the Echo, so angry was Tranmere boss Ronnie Moore after the defeat that he cancelled the players day off and sat them down to watch ‘The Nightmare Before Christmas’ instead. Horrifying stuff, although I imagine the majority were quite relieved when the TV sprang into life showing the five nil hammering instead of Tim Burton’s dark and depressing 1993 stop-animation movie of the same name.

The Wirral News provided a little build up before the game, profiling ‘fiery’ Paolo Di Canio and how he divides fan opinion, describing the managers current tangles with the chairman as ‘family squabbles’. As long as these ‘family squabbles’ don’t end in the same way as those exhibited by my former neighbours – they used to have some vicious sounding arguments (terraced house, thin walls) but they always ended in the same way, with loud, aggressive sounding sex. Presumably between the parents, but it was Rodbourne so you never know. So if Sir William was thinking about using this as his conflict diplomacy method, then maybe this could help.

Anyway, sandwiched in-between our two festive fixtures, was the small matter of Christmas, it was also my eldest sons birthday on the 23rd, so it was a total out and out toy fest for the duration.

I also had a few cool STFC related gifts, not available from the club shop mind you, but if you look in the right places you will find them.

First off I was well chuffed with this:

The back of packaging says “If you need a solid defensive foundation to build on, look no further than this classy, flexible solution.” Says it all really.

Speaking of flexibility, I was also given a Swiss McCormack pocket knife, another versatile tool which solves a multitude of positional issues. Only the other day I discovered another implement which has yet to be used – it was hidden between ‘left back’ and ‘centre midfield’, it’s called ‘stocky, aggressive, emergency striker’, I can’t wait to see that in action. 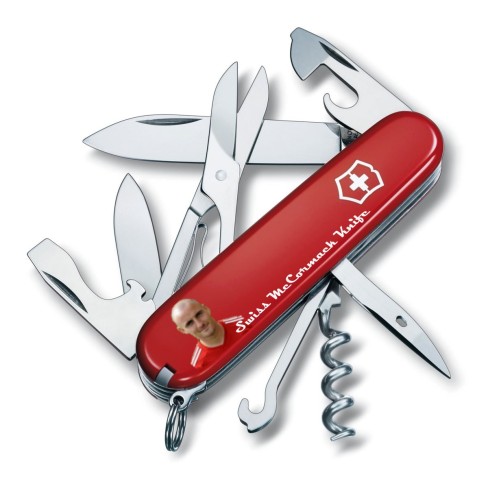 And finally, if you’re a person who has a frustrating job, one which requires a lot of exaggerated gesturing and chucking items of clothing around in anger, then this is for you – 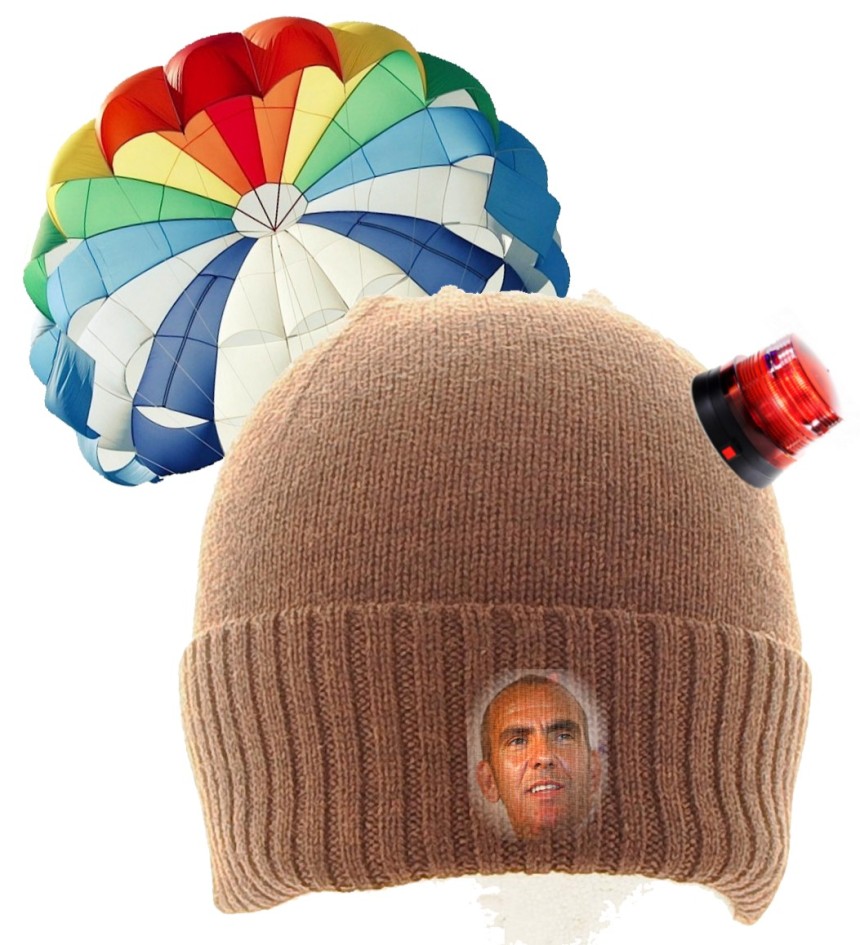 The Beanie Di Canio, complete with an automatically deployed parachute for those moments when you snatch it off your head and hurl it randomly in anger. It saves the item from flying too far away from you, if this fails a flashing light and ear piercing siren activates to enable easy location when you’re scrabbling around in the dirt of your dugout (or other place of work) trying to find it. All this wrapped up in a natty, vaguely militaristic style.

Moving back to the football, Town’s next two fixtures were washed out by the seasonal weather, or as the haiku-like headline of euro football site bundesligapremier.it put it : “Swindon Town, wet Christmas: postponed two matches”

So up next ringing the doorbell of Madame STFC’s house of pain were Portsmouth. And like a sheepish Tory MP they withstood (and probably quite enjoyed) a light spanking for an hour, before being subjected to a darn good thrashing with a cat-o-nine-tails and a gross violation with some love beads.

It was an experience that left caretaker boss Guy Whittingham understandably ‘shell shocked’ , although some Pompey fans offer some words of wisdom to their manager here.

Plenty of the plaudits were saved for James Collins, in The Sun he is described (predictably) as a ‘supersub’, ‘smashing’ four goals. The Daily Mail go really over the top with 12 photos, including 5 which cover Di Canio dastardly attempts at nicking Collins’ matchball, the bounder! The Corriere dello Sport, also go with a similar photo feature.

So on the back of his 4 goal performance, and as this is the New Year where diet resolutions are made (and quickly broken) James has decided to cash in on the fitness DVD market. In America, they had the famous craze of the 8 minute abs DVD, some of you may have heard of it, if not you’ll probably be more aware of the 7 minute abs idea.

So in light of all this, I give you the all new ‘12 minute Hat Tricks’. A DVD crammed full of exercises like ‘ghosting past static centre-backs’, ‘perfect positioning 101’ and ‘sticking yer ‘ed in where it hurts’. Yeah I know, a bit unfair on Chris Martin, I like the guy and would welcome him on a permanent transfer (especially if he can re-create this) but I really couldn’t look the proverbial comic gift horse in the mouth!

Onto the Carlisle fixture, it couldn’t happen again could it? Well it blimin’ should’ve done, in arguably the better performance compared to the previous two fixtures, the full works were dished out by a cruel, sadistic Town, issuing an eye-watering beating complete with whips, beads, plugs and clamps.

“The Robins overwhelmed United with some superb attacking play” cooed the fantastic News and Star – which still remains the best of the local rags I’ve looked at for this column.

Williams’ goal doesn’t cut it though in the eyes of Carlisle forum member NewBlueDream, who dismisses the wonder strike with this cutting comment – “1-0 to them. Defence failed to pick up goalscorer at a throw-in. He was in acres of space, a poor goal to concede!” I suppose he described Gazza’s goal against Scotland in Euro 96 as ‘a tap-in’.

The Sun gushed over the performance “Slick Swindon, who were oozing class and confidence, clattered lowly Carlisle.”

The Sun also mentioned the whole Di Canio ‘stumping up £30k’ issue, as did the Daily Mail, never one to pass up an opportunity to let fly in a ‘poor workers against the management’ tub-thumping piece. The Mail carries on with the Di Canio love in their blog Football League declaring “Mr Nice Guy gets Robins flying again”.

Goal.com get in on the act, telling us all that we need to learn more from Di Canio, with the basis of the article being this famous act of selflessness.

Of course, I couldn’t finish without mentioning the most important story of the week, Simon Ferry’s new haircut. Revealed to shocked fans via Twitter, some fans were seen heading straight for therapy, whilst others wept openly in the County Ground car park.

An impromptu fans shrine has already formed on the very floor where the hair fell at the Talk of The Town salon in Devizes Road – causing a trip hazard for dozens of hair technicians due to sheer amount of candles, flowers, laminated poems and scarfs. Oh the humanity! 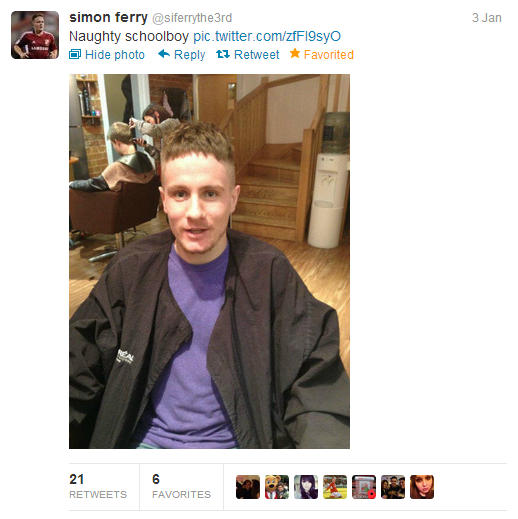 I’ll finish on this, no words are needed, just enjoy it. 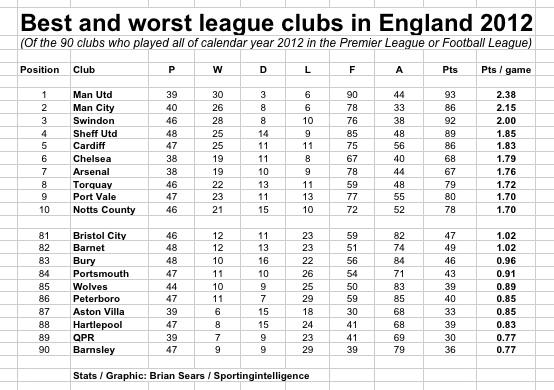