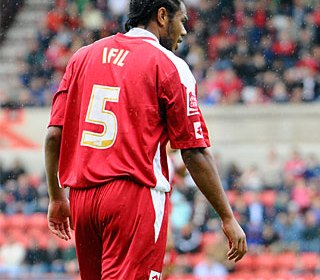 We talk to former Swindon Town, Watford, Aberdeen and Bristol Rovers defender Jerel Ifil about life at the County Ground, being managed by Andy King, playing in the Scottish Premier League and his plans for life after football…

Ron Smith – It took three loan deals and a persistent Andy King to bring you to Swindon. How frustrated were you to a) be overlooked at Watford; and b) by their efforts to keep you when first team football clearly wasn’t available?

Jerel Ifil – I was very frustrated to be overlooked as I had signed a 3 year contract with Watford 6 months earlier, but that was given to me by Gianluca Vialli and Ray Wilkins. When they got the sack and Watford fell into money troubles Ray Lewington became manager and he phoned me to tell me they had accepted an offer from Wycombe.

RS -At the time you were attracting interest from Peterborough United, Wycombe Wanderers and others. What was it about Swindon to bring you here permanently?

JI – I obviously enjoyed my time here on my three loans, I loved the fans and the squad so I told Watford I would only leave if I went Swindon, they actually took less of a fee for me coming to Swindon as Wycombe offered more.

RS – What would you say were your greatest qualities as a defender?

JI – I’m an unselfish player, I would and often do put myself in positions only I could deal with. which is risky but that was due to the fact I was so much quicker than other players and read the game well. I’m a team player.

RS – In post-match interviews Andy King often seemed to single you out, what is your opinion on managers who criticise their players in public?

JI – Some managers are like that and that is there choice. I don’t agree with it especially if the manager has young players who are learning the game.

You’re all supposed to be a team and players find it hard to play for managers that hang them out to dry.

RS – And, following on – Listening to former Town players, there seems to be a widely differing view of Andy King, what was your experience of him like?

JI – He believed in me enough to buy me so I’ve got to be thankful for that. Whatever happened from then on I have forgiven and learnt from. life’s to short to hold on to negative things.

RS – You and Adi Williams formed one of Swindon’s best central defensive partnerships for some time, what was it about that partnership which worked so well? 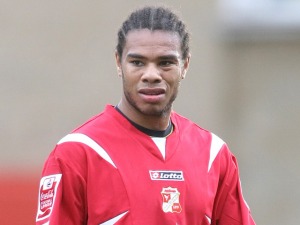 JI – First of all we got on well. then other than that I think we appreciated and knew each others strengths, but he sustained a bad knee injury and then Jamie Vincent played most of the end the season with me and we formed a very good partnership also. The main thing about the defence in that year in fact as a team is that we were fit, coached properly and drilled to know our jobs. I went from no shape or team tactics to doing it three times a week.

RS – Players always say at the time that they don’t let off the field problems affect them. You played through some troubled times for Town, how much did the pay problems and protests affect you?

JI – To be honest it did not affect me, the board were honest and open and we knew what was going on. We never missed any wages just deferrals of bonuses which you can appreciate given the situation the club was in. So we just got on with it.

RS – Danny Wilson’s arrival signaled the end to your long time at the County Ground. Can you shed some more light on your final matches in a Town shirt, an apparent recall at Gillingham and then your departure.

JI – Danny Wilson was a top manager, We never fell out or anything he actually really liked me as a player, but before the game at Gillingham he told me Aberdeen approached them and he thought it was a good move for me in both a football sense and financially.

I was feeling like I needed a change so I went. It happened very quickly as they wanted me to start the season against Celtic, so never really got a chance to say bye to anybody.

RS – Your time at Swindon included 231 games over eight seasons, making you number 56 in the all time list of most appearances in our red & white. You had the highs of playing a part in our League One Play-Off Semi Final season 2003/04 and our League Two promotion in 2006/07, but the lows of relegation in 2005/06 under Iffy. With player / club loyalty in such short supply in modern football what resulted in you spending eight years in Swindon?

JI – I had a great time at Swindon and grew as a player from a boy into a man playing for Swindon, experiencing the lows helps you grow and I definitely did that at Swindon.

RS – Looking back what were your proudest achievements?

JI – My proudest achievement was the promotion and receiving the players player of the year award in that promotion year.

RS – And, what were the times to forget?

JI – My Seasons under Malpas and Andy King.

RS – A move to Scotland and Aberdeen caught some by surprise. You went on to make 44 league appearances in the Scottish Premier League before departing in January 2011. For any professional to play in a top flight is a fantastic achievement, what do you take from your time at Pitodorie?

JI – It was great to play in front of the crowds of 60,000+ at Rangers and Celtic and experience the media attention of playing in the top flight.

RS – After returning to England, where has football taken you and have you finally hung up your boots?

JI – I haven’t quite hung up my boots lol!

I came back, played for Bristol Rovers (sorry) then took a chance playing non-league at Kettering which didn’t turn out to be what I had expected.

RS – You played under plenty of different managers, which one do you think really got the best out of you, and how did they do it?

JI – Dennis wise by far. He made me enjoy football again after a horrible year. He improved my game by simplifying it and the whole squad enjoyed training everyday yet we worked harder than ever. Good times!

RS – You’re now back in Swindon working as a Performance Coach. What does the role entail, why does it appeal to you and where can our readers find you for coaching?

JI – I am now helping others achieve their goals, whether it be to lose fat, gain muscle, or improve fitness. I’m also a mentor at colleges.

I have always been into fitness and health so this feels like something I can naturally fall into once I eventually hang up my boots.

I work at the Absolutely Fit Studio Swindon [at Unit 3 in Kembrey Business Park] where I do one to one sessions. I’ve also done men’s Strength & Core classes. The classes were for anyone, of all fitness levels as you’re only competing to improve yourself. Follow my Twitter @ifilfit for updates on when the classes take place.

RS – Just one final question. You’re back in football, how much are you looking towards getting first team football..?

JI – I’ve just signed for Staines Town FC, hopefully I can get back in the swing of things as its been a while since I played competitive football but i’m looking forward to getting back in action.

RS – Thanks for taking to time to speak to us!