Swindon Town started the season in the best way possible, dumping Championship side Brighton & Hove Albion out of the newly dubbed ‘Capital One Cup’, putting aside any worries about the removal of Paul Caddis as captain in the process. Writes Daniel Hunt.

As my sun-burnt Dad would testify from his seat in a bar in Bulgaria, two debutants lit up the second half as Town justified their tag as one of the teams to watch in League One this season. Andy Williams looked the most dangerous man on the pitch, playing a part in the creation of all three goals, while former Seagull Alan Navarro made a mockery of his goal scoring feats at Brighton (1 goal in 85 appearances) by netting twice in ten second half minutes.

While it was made clear that Alan McCormack would take over the captaincy, Paolo Di Canio plumped for Joe Devera to replace Paul Caddis at right-back. The only other surprises came in the form of De Vita replacing the injured Gary Roberts and Simon Ferry having to be content with a place on the bench behind Tommy Miller and the evening’s hero, Alan Navarro. James Collins was on Republic of Ireland u21 duties which meant young Miles Storey was thrust into the role of third choice striker in the match day squad.

Swindon’s brightest moment of the first period came inside the opening 90 seconds but Andy Williams could only head the ball wide after arriving late to meet McEveley’s left wing cross. The half was characterised by two sides content to play patient football on the ground. The tempo was slow and although Brighton edged it on chances, the two teams seemed to cancel each other out as the blank score line at the break would confirm. Wayne Bridge shot wide from distance in the 11th minute before Ashley Barnes almost squeezed the ball home at the back-post from a right-wing corner in the 12th minute – the ball struck Foderingham’s right hand post but Barnes would have done very well to net.

A large period of inactivity was ended when Brighton’s now bandaged full back, Salter Bruno, forced Foderingham to smartly parry a stinging deflected drive from the edge of the box seven minutes before half time. The most gilt edged chance for Brighton stemmed from a sloppy Devera pass in first half stoppage time. The former Barnet man’s wayward forward ball was intercepted by Vicente whose mazy left channel run ended in a neat ball inside to Barnes but luckily for Swindon, Barnes could only shoot tamely into Foderingham’s hands in the centre of the goal.

In a reversal of fortune from pre-season, the interval benefited Town. Di Canio’s men came out attacking a Town End that could be in its last season in existence if Mr Wray gets his way with Swindon Borough Council. It could have been a very different story had Navarro’s 46th minute loss of possession on the edge of his own box not gone unpunished by the lively Vicente. Foderingham had the pleasure of watching the ex-Valencia man’s shot rise over the cross bar to the relief of Navarro.

Andy Williams provided the spark of pace to win the free-kick that led to the opening goal with barely seven minutes gone in the second half. It was an impressive surge from the former Yeovil man, fully backing up my call that he’d be the signing of the summer for Swindon. What happened next was no surprise to Town fans that have followed pre-season closely. A smart free kick involving Navarro, Miller and Ritchie caught Brighton completely on the hop and allowed Benson to score from his favourite distance – 6 yards! The same free kick that worked so well in Italy and at Weston-super-Mare.

The game as a spectacle desperately needed Benson’s 53rd minute goal but in reality, any resistance from an impotent looking Brighton side was quashed once the second goal went in. I was looking forward to seeing two quality players in Craig Mackail-Smith and Will Buckley, but injury robbed the tie of both and Brighton looked a worse side for their respective absences.

Wes Foderingham had to make a very timely save to deny Vicente just a minute before Navarro made it 2-0 in the 65th minute. Craig Noone had been wasteful on the left flank several times in the half already but this time he fed Vicente whose excellent turn and shot was tipped wide by the impressive Foderingham. Up the other end Swindon went and the combination of a Benson flick on and a direct run at goal from Williams laid the ball on a plate for Navarro to side foot home below the angle of post and bar. It was a fantastic finish and a wonderful way to announce yourself to your new home faithful.

Two things stood out to me in the build up to the goal; firstly, why was Benson unchallenged in the air, and secondly, that Williams showed great strength and pace to get round his marker and set up Navarro. Former captain Gordon Greer and his young deputy, Lewis Dunk, were given the run around as the second half wore on. Some fans chose to boo Greer but I don’t understand that personally. In a week where the importance of captaincy is being so openly debated, it is worth recalling our calamitous season immediately after selling Greer to Brighton for a mere £250k. Plus, he karate kicked Deon Burton in the chest, a feat worthy of celebration in itself!

Far from sitting back on their lead, Matt Ritchie and company went in search of a third goal, resulting in a swathe of shots and corners for Thomas Kuszak to deal with. Suddenly Swindon’s wingers looked confident and dangerous after a muted first period. De Vita stung the palms of Kuszak from a cross come shot cutting in from the left wing in the 68th minute.

The 5,737 spectators in the ground didn’t have to wait long to see the icing on the League Cup cake as more Benson/Williams build up play set up Navarro to drive home with the aid of a deflection off a Seagulls defender. You could sense on the night that Navarro’s never had to contemplate a second goal celebration in the same game – if in doubt, stand there smiling and accept the hugs from your new team mates ‘eh Alan.

The Navarro love-in continued when Simon Ferry replaced him in the centre of midfield in the 82nd minute. Both sets of fans rose to their feet to applaud the 31 year old scouser, a classy touch from the 716 Brighton fans that made the trip. Luke Rooney and Miles Storey also made cameo appearances from the bench as the game fizzled out. Were Swindon very good? Or Brighton very poor? The answer almost always sits somewhere in the middle. 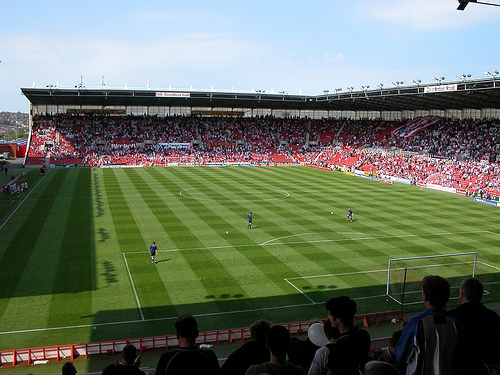 Looking from the outside in, the signings of Wayne Bridge (32), Saltor Bruno (31) and Rodriguez Vicente (31) all have an element of novelty about them. I’m not in an ideal position to comment but I think Brighton would be better served by sticking with younger, hungrier professionals if they have ambitions of escaping the Championship in the next few years. Let’s face it, Bridge is past it.

While Gus Poyet is “concentrating on the league”, Di Canio’s revamped Swindon side have the task of defeating Stoke City on their own patch in the Second Round. It’s not a glamour draw but Town fans will travel in big numbers I’m sure. All it takes is for Tony Pulis to take the game slightly less seriously than a league game and I reckon Town have got a chance.

Indeed, Paolo can claim something of a tactical victory over his counterpart in this tie. Devera and De Vita may have seemed the boring picks but it kept the first half tight and the scores level, ready for a little bit of quality to shine through in the second half. If Swindon have got a chance of conquering the Britannia Stadium in late August then a repeat dose may be in order.