Leon Clarke has got to go 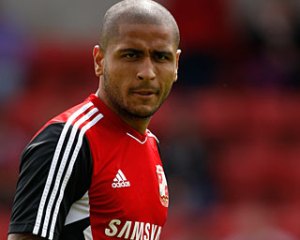 For those of you who read Alex’s article last week – Leon Clarke: Swindon’s new no.9 – are you really surprised by the actions of the pathetic Town current / former* (*delete as appropriate) front man following our 3-1 defeat against Southampton?

Here is a fragile, perhaps sensitive player who relies too much on the support of those around him to get himself in the right frame of mind.

Yet he’s displayed his true self, an individual who’s inner child exploded into full view, throwing what can be described a ‘tantrum’ any 2 and a half year old would’ve been proud of on the County Ground pitch. What next the Supernanny and the naughty step..?

Not only that; to then react to Paolo Di Canio’s comforting arm in the way he did, through his persistent angry and disrespectful remonstrating with the Italian and to follow this up with a protest on the grass and cry to ‘Daddy Wray’ was disgraceful behaviour. Apparently this bloke is a professional footballer.

The end result, Di Canio is the headline and undeservedly blamed and then thrust into the limelight rather than Clarke. Paolo was initially accused of assault, fighting or attacking his own player, albeit perhaps this is what the media had long hoped for and already drafted, with their finger hovering over the button for months now.

And all of this because Leon was angry at the prospect of “more running again tomorrow” as his legs were tired… Clarke is a joke!

Yes it’s true Fitness Coach Claudio Donatelli should choose his words and moments more carefully in the future, however that was no excuse for Clarke’s unruly, selfish and disgraceful behaviour.

So today we hear Clarke didn’t report for training so the question remains will he wear the Swindon red again?

As you can probably tell from the tone of this piece, Town should tear up Clarke’s contract and send him packing with his reputation in tatters.

With a wealth of strikers in De Vita, Connell, Magera and Kerrouche, plus a new lad from West Ham on the way, Town have sufficient options in attack to fill Clarke’s boots.

I just hope all those who bought a ‘Clarke No.9’ shirt are offered their money back…

What is your view whether Clarke should stay or go?