Swindon v Oxford: Rivalries, we’ve had a few. But then again, just one to mention

The derby build-up continues as The Washbag links up with We Are Going Up! The WAGU! podcast co-presenter and STFC supporter Carl McQueen looks at the passion and anger behind the A420 derby and why this is the only game that matters.

You big wigs can have your Manchester derby, your Merseyside  derby, even your North London derby. League Two types don’t ‘do’ derbies named by hazy geographical designations. Instead, they stick to unappealing A-roads which mean nothing to the common man – welcome to the A420 derby – Swindon Town v Oxford United. Please drive carefully.

It doesn’t matter if you support Barcelona or Barnet; regardless of whichever club you cheer across the world, to fans of the teams concerned, it’s the fiercest rivalry known to man and the only one that matters. On Sunday that passion combusts into life once again for Robins and U’s fans.

Speaking of Barcelona, last year the football purists were saturated with El Clasico’s left, right and centre. Town and United fans have been starved of a match for nine years. Unimaginable if you cheer on Real Madrid or Barca, but something us Town fans have had to stubbornly put up with. Allow the knife to be stuck in early here and say the main reasoning behind this is Oxford’s plight that saw them enjoy a number of seasons in the Conference.

But now we sit on even terms. They have one of the world’s most renowned university’s, we have the Magic Roundabout. They have a cathedral dating back to the 1100’s, we have the Oasis Leisure Centre. They have Inspector Morse, we have Billie Piper. This is not an edition of Newsnight Review, this is an episode of Two Pints of Lager and a Packet of Crisps.

It’s conceivable a rivalry may have never ignited at all had Accrington Stanley not folded in 1962. Oxford United were granted league status in place of them and the rest is history. As fate may have it, Oxford’s departure from the Football League in 2006 resulted in them being replaced by  none other than Accrington Stanley. I’ll allow you to say it’s a funny old game at this point in the article.

One of Swindon Town’s leading supporter websites suggests the ignition pilot failed to light early on however, with six of the first ten games between the teams ending in 0-0. Results to hardly get the blood boiling. But it’s a fine wine of a footballing derby, complemented by a greasy curry Pukka half-time pie. Improving with history whilst being accompanied by the inevitable stress-induced heart attack that watching the lower league football team you support brings. 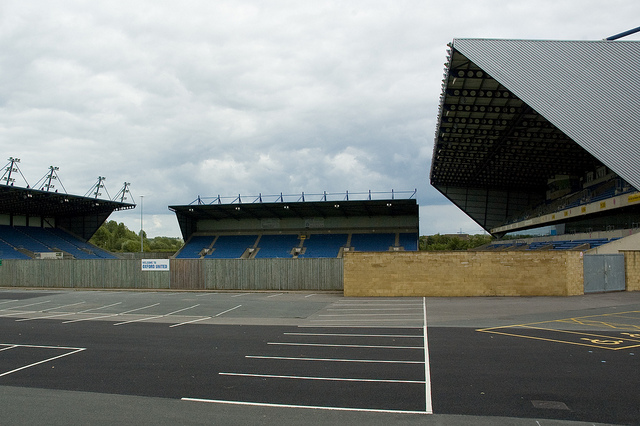 View from the away end at The Kassam

They’ve both won the League Cup once, but neither were allowed to compete in Europe despite to their success. Town were prohibited because they played in the third tier of English football at the time (1969) and United were denied because they won during a time when UEFA had banned English teams from European competitions following the Heysel disaster (1986). Both have effectively been prohibited from the dizzying heights of Borussia Monchengladbach away due to the stubborn nature of football bureaucracy. Even Robert Maxwell’s fraudulent millions couldn’t pay for Oxford’s way into the competition.

The two sides have met 53 times in the past, and Oxford have only won on 10 occasions. Were it a boxing match, the referee would have called this bout off around September 1990. But now it’s August 2011 and they’ve risen from the canvas. Neither side particularly wanted to meet in the fourth tier of English football, but evidently both sides float like a butterfly and sting like one too.

Despite the fact the two rivals last competitively met on the 8th December 2002 in the FA Cup – Oxford won 1-0 in the only game between the two teams to have been hosted at the Kassam Stadium; or “that ridiculous ground with three stands and a car park at one end” according to most Swindon fans – the hatred remains as strong as ever. During the witching hours of Friday night last week, Town ‘fans’ broke into Oxford’s ground and embossed “STFC” into the grass using petrol and lighters. It was there for all to see as the U’s took on Bradford City on Saturday afternoon…unfortunately the initials did appear as if a two-year-old had scrawled them across green crepe paper with a human-sized black crayon, but the intention lingered throughout the match – “oi, Oxford, we’re waiting…”

The unspoken taboo of players appearing for both sides has occurred on various occasions; in recent years Tommy Mooney, Adrian Viveash, Jimmy Glass (Yes Carlisle United fans, THAT Jimmy Glass) and Eric Sabin have all crossed the divide during their meandering careers. Most infamously however, Joey Beauchamp will go down in Swindon Town’s unwanted folklore as the player theoretically brought for a fiver and sold for a penny and morally became the A420 equivalent of Mo Johnston. It may not have made the list of “Football Transfers to Shock the World” but Mr Beauchamp will never be welcome in Wiltshire.

Now Swindon have the infamous Paolo Di Canio in charge, they have a backroom nonentity in Chris Wilder as manager. Swindon have a matured amphitheatre steeped in tradition and supporter passion, they have a car park with a field attached. Swindon have the spirit of Isambard Kingdom Brunel’s work strewn throughout our town, they have, well, quite a lot of impressive architectural work. But remember this isn’t about culture; this is about football, stupid.

Swindon have plenty of wannabe rivalries – this football fans census suggests they’re ranked thirteenth in the country when it comes to teams who define us as ‘the enemy’, joint level with Cardiff City and even ahead of former European champions Liverpool, Nottingham Forest and Aston Villa – the fans know how to ruffle the proverbial feathers.

So next time you’re quaffing on a Budweiser in your armchair while watching Manchester United versus Manchester City, or Liverpool, or Arsenal, or Chelsea, or whoever else wants to be their main rival this week according to Sky Sports, think of the Swindon fans, and even Oxford ones for that matter, kicking off at 1pm on Sunday afternoon due to the advice of police. Not because of TV scheduling. Oh no, the only cameras in attendance will be those filming fights on their iPhone, or the work experience kid at the BBC to provide any possible goals for the local Beeb amateur dramatics, sorry I mean news bulletin, at some point that evening. If it’s really on the advice of police, they’d have been better off playing at about 10.30am on a Tuesday morning – at 1pm on a Sunday afternoon Town fans will just keep drinking having been out all night on Saturday. Seriously. John Betjeman gained inspiration for ‘Slough’ by hanging out in Swindon.

Bristol Rovers, Reading and even Gillingham may officially categorise us as unwanted visitors, but all equate to mere cannon fodder in supporter’s eyes compared to that team in yellow who live about 30 miles away. As Prince and Sinéad O’Connor perhaps once (almost) realised while stuck in a traffic jam around Shrivenham on the A420, nothing compares…to the U’s.

Listen to the latest WAGU! podcast on Mixcloud